This is a preliminary draft of Hilda van Stockum archives and gallery collections. Her archives are scattered all over the world. My interest is initially just getting as complete list as possible of locations with website links or addresses. Later I or someone else can fill in details about the contents and encourage each location to keep a list of where other sources are, so that followers of HvS's art and writing can track down sources without having to engage in wild goose chases.

KENYA
Kianda College, Nairobi, Kenya. (Churches and chapels. Kimlea. Olga Marlin has been totally committed to Kianda since the 1960s.)

OTTAWA, Ontario, Canada, October 10, 2015. It is Thanksgiving weekend in Canada and it is a Marlin family reunion.

Her 80th birthday actually does not occur until January, but we are taking advantage of the confluence of three Marlin siblings and four more in the next generation to start celebrating.

Brigid was coming from the opening in Montreal of an extensive exhibit sponsored by the international artists' group that she founded, the Society for Art of Imagination. She is the author of A Meaning for Danny and The Box House, and illustrated Hilda van Stockum's book King Oberon's Forest.

Randal and Elaine have two sons and a daughter already visiting - Alex, Nick and Margie - and another daughter arriving later today (Christine, with Michael Schintgen and their three children).

The event was in the Wilfrid Restaurant of the Fairmont Château Laurier Hotel.

The birthday party was attended by the three Marlin siblings - Brigid, Randal and me - and two spouses (Elaine and Alice), plus three of Randal and Elaine's six children visiting for Thanksgiving - Alex, Margie and Nick - and Nick's significant other, Taeko. The other five are arriving this afternoon in time for a turkey dinner.


Both the restaurant and the hotel are named after Sir Henri Charles Wilfrid Laurier, a great man in Canadian history.

Wilfrid Laurier was not the man at the left, who is Randal Marlin, a professor of philosophy at Carleton University, an expert on propaganda (author of Propaganda and the Ethics of Persuasion, now in its second edition) and my brother.

Rather, Laurier is Canada's Quebec-raised 7th Prime Minister (1896-1911) -its first francophone Prime Minister - the man in the carriage at right, who was prime minister of Canada immediately before World War I. One of the two ladies next him is his wife Zoé, Lady Laurier, after whom the piano bar-lounge at the Château Laurier is named.

Laurier was a Liberal, elected and re-elected  over a 15-year period until the Great War. Conservatives then ruled until 1917, when the Liberals came back and stayed in office until 1984. (Postscript - October 22 - the Liberals are back with Justin Trudeau.)

Laurier was voted Canada's best-ever prime minister, according to a 2011 poll by Maclean's Magazine. His portrait is on the Canadian $5 bill.

Posted by John Tepper Marlin at 1:01 PM No comments: Links to this post

The Boissevain Family Reunions seem to occur every five years.

Below is the first of the five pages of a newsletter that Aviva Boissevain prepared after the 10th Reunion. If there is any interest (email me) I will post the other four pages or will provide a link if it is already posted. 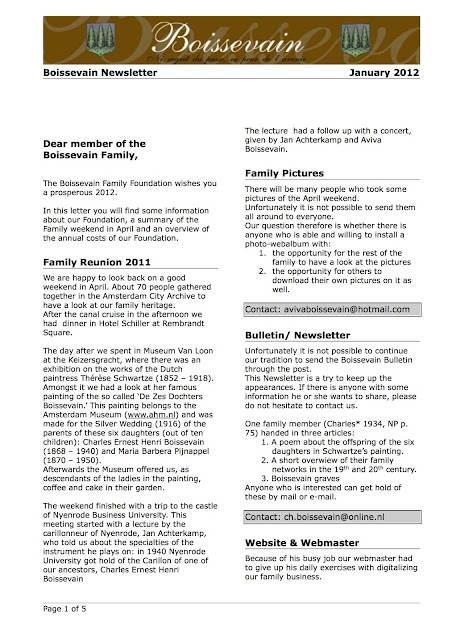 Posted by John Tepper Marlin at 3:28 PM No comments: Links to this post

The Keating/McLaughlin Award for Outstanding Art Work is awarded every year - a Silver Medal and a cash prize of €3,000 awarded by the ESB (Electricity Supply Board).

My mother won this medal in 1989 but no one can remember which of her paintings won the award.  Three paintings were submitted:


If you have any information about which it was, and possibly a photo of the painting, the ESB would like to have it.