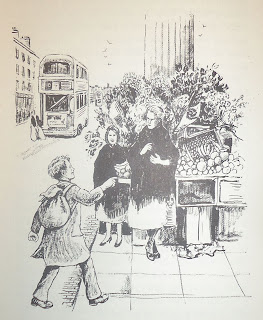 Rory O'Malley was picked out in an Irish orphanage by the parents of a 12-year-old boy who looked just like him, with red hair and freckles. When we first meet Rory, he is escaping from the house because he finds it creepy to be living out the memories and expectations of still-grieving parents.

He explains to an evidently inebriated man he meets and helps on the road to Dublin that "they wanted me to be their dead boy."  He explains also to the man, Lionel Usher, that he has no relatives. Usher observes: "You have too few [relatives] and I have too many. Have some of mine." In the end, Usher is discovered by relatives and he brings Rory home with him, claiming him as a nephew. But in the morning Usher doesn't remember his offer, and Rory moves on. 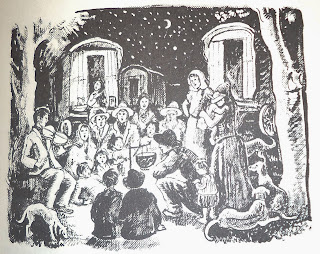 At left is a drawing of Rory in the middle of Dublin. He walks by Nelson's Pillar, which was then (about 1950; the Pillar  was destroyed in 1966) in the center of O'Connell Street. From there he is advised to get food in the market on Moore Street. At the market he comes across two girls in gypsy dress selling paper flowers. The younger one, Rory's age, is accused by a baker of stealing a cake. Rory notices a yellow stray dog eating the cake and he points it out to the baker, earning the gratitude of the girls, who disappear. Attention is then focused on the dog, who would have been taken in by the police if Rory didn't claim it as his own and pay for the cake. Rory and Sandy are picked up by a boy with a wagon delivering potatoes. Sandy leads Rory to the place where the gypsies (also known in Ireland as tinkers or travelers) had made their camp. Sandy is welcomed by the other dogs because he belonged to the flower girls. Rory is welcomed because the flower girls had explained the story of Rory's successfully defending them. Zena, the younger flower girl, and Rory become very attached to each other. Rory learns to speak Romany, the language of the gypsies, and learns much from them about their customs and about their way of life and beliefs.

The author shows how the Romany believe they own the earth and everyone else is only borrowing from them. G. K. Chesterton put it well when he said: "Thieves respect property. They merely wish the property to become their property, that they may more perfectly respect it." (The Man Who Was Thursday, 1908)

Rory in turn tells stories from his life and in time is given the high compliment of being called "Penengro" - the Roma word for story-teller. 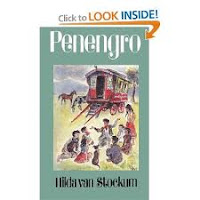 To go on might spoil the story for those who have not read the book. The ending for Rory is realistic and satisfying. The book is based on Hilda van Stockum's research into the Roma, the gypsies as they were widely called when the book was written. HvS considered it reason enough to side with the Roma, to know that that Hitler persecuted them! As Desmond Oakley says in the preface to the 2010 edition (the original edition was published by Farrar, Straus & Giroux in 1972): "In showing the challenges faced by a downtrodden minority, it also reveals to the rest of us how much we have lost our relationship to nature." This book could be considered an introduction to gypsy history, a topic of great controversy and interest. As an entry point into the current dialog, see Sinéad ní Shuinéar, "Apocrypha to Canon" (from the 2004 conference of the Gypsy Lore Society), History Ireland, Winter 2004. Discussed in an interview on “Sullivan’s Travels”, a talk show on LTV in East Hampton, for 2012 airing.
How to Order Penengro. The book is available from Amazon for $9.95 (free shipping for orders above $25 to a single U.S. address). Preview (“LOOK INSIDE”) available. Kindle version available for $6.95.
Posted by John Tepper Marlin at 1:22 PM No comments: Links to this post

Patsy is a girl who rolls with the punches. She always wanted a puppy but her mother thinks Patsy is too young, even though she is "almost five years old now".

But one day a puppy follows her home. Patsy gives him something to eat. Her mother makes it crystal clear that the puppy belongs to someone else and must be returned. The mailman recognizes the puppy: "It belongs to Mrs. Murphy in the pink cottage on the hill." So Patsy must return the puppy immediately.

What an assignment! Patsy takes the long way round and gets into all kinds of adventures on the way, but never once gets discouraged or loses track of the puppy. This is a story about adopting and taking responsibility for a pet.

It's not easy. The puppy runs around trees, wrapping the leash around the trunks. He runs into the street, provoking angry comments from a driver. He runs into a drainpipe. He chases a kitten and ends up inside a school room. He eats the teacher's lunch, so Patsy gives the teacher her own sandwich. Patsy and the pup finally get to the hill where Mrs. Murphy lives, but the puppy chases a rabbit into a deep wood. They were lost.

There is a noise. Is it a bear?  This is the low point of Patsy's tale... But a hunter rescues them and takes them out of the woods to within sight of Mrs. Murphy's house. The puppy is not eager to return. Patsy returns the pup. 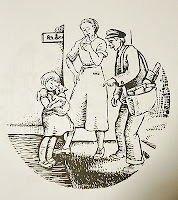 Mrs. Murphy's response is unexpected: "Sure and I'd hoped I'd never set eyes on him again. That pup's nothing but a botheration."

Patsy is agog. "You mean you don't LOVE him?" Mrs. Murphy answers: "Wasn't I glad to get rid of him?" Mrs. Murphy gives Patsy the pup and a cookie to take with her. Patsy and the pup dance their way home, as in the cover picture below. When her mother hears about Patsy's adventures and Mrs. Murphy's response, she decides to let Patsy keep the pup, whom Patsy calls Honey. "You seem to have taken care of him quite well," says Patsy's mother. "I think you deserve to keep him." Patsy and Honey then have a nice long nap.

The character of Patsy is based on Hilda van Stockum's daughter Elisabeth at about five years old - the dedication is to "Elisabeth and Trusty", the latter being the Marlins' Montreal dog, delivered as a puppy to Elisabeth in a pail. In a preface to the 2009 edition, Elisabeth Marlin writes: "This is a story that parents and children from two to six will enjoy reading together, over and over again." A book now for Elisabeth's growing number of grandchildren!

The book was discussed in an interview on “Sullivan’s Travels”, a talk show on LTV in East Hampton, NY for 2012 airing.

How to Order Patsy and the Pup.  Available from Amazon for $9.95 (free shipping for orders above $25 to a single U.S. address). Preview (“LOOK INSIDE”) available on the Amazon website.
Posted by John Tepper Marlin at 1:46 AM No comments: Links to this post

Kersti is one of Hilda van Stockum's controversial characters. She is the last child in the van Disselen family, which was - after six daughters -  perhaps understandably hoping for a boy. Kersti is naughty. But as Elisabeth Marlin says in the Preface, "her naughtiness [is] balanced by courage and generosity." She is also a convincing advocate for her causes, and this is the heart of the story. After a number of Kersti adventures that make clear that St. Nicholas would be well within his rights to leave a lump of coal in her clog come the night of December 5 (the eve of the saint's birthday, when he visits children), Kersti comes face to face with St. Nicholas and gets him to agree to give presents to undeserving children. Hilda van Stockum was criticized for this by some reviewers and her published response was: "I claim no responsibility for [Kersti's] actions. I had a lovely, sweet, good little story for nice little children and Kersti just came and played havoc with it. She ruined the moral, shocked Pieterbaas, had a very bad influence on St. Nicholas and did not deserve a present at the end. I wash my hands of her." But we  know that Hilda van Stockum had a huge love for all her characters, especially including Kersti.  The story is based in Zeeland, in the southwest corner of Holland, bordering on Belgium. Hilda van Stockum was thereby staking a claim in a different part of Holland from her first book about Holland, A Day on Skates, which was based in Friesland to the north.

Kersti was first published by Viking Press in 1940 and was highlighted in the roundup of new children's books in the New York Times on December 1 that year. The book probes the mythology of St. Nicholas (Sinterklaas), who visits homes with his Moorish assistant Piet on the eve of his day, December 6 to mete out rewards for those children who have been good during the year. St. Nicholas Day is the year's most important celebration in Holland. It also provides a realistic picture of Holland in the days before cars and electricity.

How to Order "Kersti and St. Nicholas" for Yourself or as a Gift for Someone Else.  The latest version of the book issued in late 2011 has  each of the major, glorious illustrations spread over two pages. Kersti is available from Amazon for $13.99 (free shipping for total orders above $25 to a single U.S. address).  A preview of the book (“LOOK INSIDE!”) is available - go to the Amazon site.
Posted by John Tepper Marlin at 12:06 PM 1 comment: Links to this post

The books of Hilda van Stockum are filled with vivid characters. Here is one of them, the book he is in, and a description of the story line that brings the character alive. 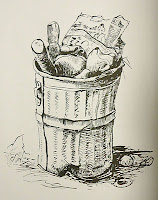 Jeremy Bear of Little Old Bear has lived a long life and is discarded, cohabiting in an attic with mice and spiders. A lady is sweeping out the attic and throws out the little old bear. He has no eyes but with ears... and emotions. He is tossed out in a garbage can and feels bereft. Even the birds and dogs reject him because he has little fur left and nothing for them to eat. Some boys play with him but get tired of it and toss him over a wall. A girl picks him up and seats him with her dolls but he has nothing to say to them. She also gets bored with him and tosses him over another wall. Fortunately, this time the bear lands on an elderly lady who is at first annoyed but then apologizes because she sees the bear is blind. She takes pity on him, brings him home and gives him new eyes. Now the bear can see, and sits by a window, looking outside, pining for a friend. The lady is preparing to give him away to the church bazaar. But before she gives him away, her favorite grandson Benjamin comes home. The meeting between Benjamin and Jeremy is love at first sight. Benjamin tosses away the characterless new bear he had been given (Benjamin couldn't think of a name to give it) and welcomes the little old bear into his arms. "He is more interesting," he says to his grandmother. "You may give the other bear to the church bazaar. I want this one. His name is Jeremy." 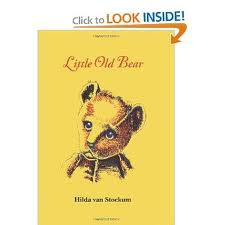 This book about rejection and acceptance will bring tears to the eyes of both grandchildren and their grandparents.

It's also about getting new eyes - a good gift for eye surgeons and their families!

Reviewed in the East Hampton Star and discussed in an interview on “Sullivan’s Travels”, a talk show on LTV in East Hampton.

Available from Amazon for $8.95 (free shipping for orders above $25 to a single U.S. address). Preview (“LOOK INSIDE”) available.
Posted by John Tepper Marlin at 8:37 AM No comments: Links to this post