AMSTERDAM, The Netherlands, September - I am staying at the Rho Hotel, on Nes off the Dam at the center of old Amsterdam.

The hotel used to be a theater–Nes was once a row of theaters.

Yesterday morning I met in the lobby of the hotel for the first time with two second cousins twice removed–Héloïse and Florence.

Florence is at the head of the table in the photo at left. Across the table from me is Charles Boissevain, my second cousin. Our grandparents include two siblings, i.e., Charles's grandfather Charles E. H.  Boissevain and my grandmother Olga Boissevain van Stockum. 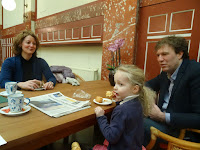 Both my sister and Héloïse are named after the same person – Emily Heéloïse MacDonnell, who married my great-grandfather Charles Boissevain.

Charles was born in 1934 and therefore turned 80 last year - the same age as my sister Olga Emily Marlin, whom I plan to see this weekend in Pamplona.

Posted by John Tepper Marlin at 7:52 AM No comments: Links to this post 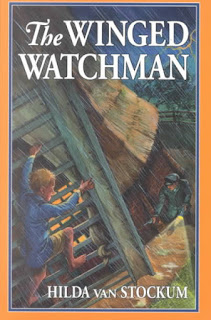 December 23, 2015–I have been asleep at the switch. I have not been following the Goodreads "Best Books for Kids on WW2" list closely since 2013.

If I had been, I would have heralded the jump in the ranking of Hilda van Stockum's The Winged Watchman's before now.
Meanwhile, The Borrowed House has held its own at #8, which is good given the fact that the number of books on the list has more than doubled.

If you, dear reader, are one of the people who voted for either of these books, thank you.

You may not know the history of The Winged Watchman. It was published in 1962 by Farrar Straus (which once wanted one of my books; I regret not having signed with them). It went through many editions and eventually went out of print. It was picked up by Bethlehem Books, which has sold about 51,000 copies in reprint.

My mother's estate, of which I am the executor, has retained movie and television rights. The Winged Watchman has been optioned twice for a movie and is currently being reviewed for a possible television miniseries.

The Winged Watchman I think is now the top-ranked book on Goodreads that has not yet been made into a feature-length or television movie.

A number of study guides seem to have sprouted up. I have discovered these for the first time. Here are four of them and a review with many comments.

Love2Learn
Study Questions for The Winged Watchman by Hilda Van ...

www.love2learn.net/literature/studyquestions/watchman.htm
Discussion/ Essay Questions: We are unable to supply an answer key to these study ...

Rating: 4/4 - ‎2 votes - ‎$4.00
This is a mini-guide (a two-week literature study) for the book titled The Winged Watchman, by Hilda van Stockum.

Two Kid Schoolhouse: Learning from, and learning to love ...

Feb 1, 2009 - Using a study guide can add to your child's enjoyment of the book and ... Recently my boy read The Winged Watchman, a story about the Nazi ...

Order a copy of the new (October 2016) edition of The Borrowed House.
Posted by John Tepper Marlin at 11:55 AM No comments: Links to this post