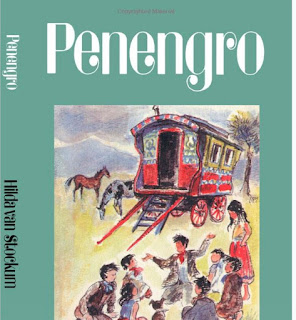 The Irish have a reputation for in-fighting over the centuries between the Catholics and the Protestants, but famously have elected a Jewish Mayor of Dublin.

However, Ireland has recently been in the spotlight for having "contempt" for Roma, whom they call "tinkers" or, more politely, "travelers".

My family lived for three years in Dalkey, not far from Carrickmines where a fire last month took the lives of ten people, including a pregnant woman. Sympathy for the travelers in the camp was apparently "short-lived" because they are so unpopular.

This is exactly the kind of cause you would have expected my mother to champion, and indeed she took up the cudgels on behalf of travelers in Ireland through her book Penengro, which means story-teller in the Romani language that she did some research on for her book.

My mother used to say – "If Hitler hated the gypsies so much, there must be something very good about them."

I can't vouch for her research (I don't know enough about traveler culture in Ireland), but the story she tells held my attention. It is about a boy named Rory who runs away from his adoptive family and goes to live among the Roma. It has elements of Mowgli and Romulus and Remus, but is much more credible and up to date

The book has six raters in Goodreads and three (none of whose names I recognize, and one of whom started out as a skeptic about the topic) on Amazon. Both ratings are 5 star (100%).

To find out more about the book, check it out here.

Posted by John Tepper Marlin at 11:53 AM No comments: Links to this post

I have been working on pieces of a biography of Hilda van Stockum (HvS). Of particular interest to me and others is her conversion to Roman Catholicism after a being brought up by two atheistic parents from a staunch Dutch Protestant family.

Since the death of HvS I have been organizing and reading her papers. Toward the end of her life when her mind was failing, she would shuffle pages and turn them upside down. She seemed to believe she was putting them in the right order, when in fact she was mixing them up. It's been a job putting them back in order based on clues like numbering, type of paper and typewriter.

Today I just across for the first time a parish bulletin dated May 1935 with a two-page essay by "Hilda Marlin", her married name. I am providing the essay from the St. John's Church Magazine.

The Vicar of the Church of St John the Evangelist in Sandymount, Dublin was Rev. S. R. S. Colquhoun. A portrait by HvS shows him in bishop-like-looking regalia and I always thought that he was a bishop of the Church of Ireland, but he never advanced that far in the church hierarchy because he was too High Church (too close to Rome) for his congregation, and he was suspended (from his job, not at least the gallows) in 1937 for his heretical views. His suspension may have precipitated the conversions to Roman Catholicism of both Evie Hone and HvS in 1938. Fr Colquhoun's portrait used to hang prominently in our parents' house in Montreal and then in England.

HvS was throughout her life seeking solace in the church. When she met my father in Dublin, they would go to the Oxford Group. The members were not as intellectual as the Oxford Movement had been, but they operated with some of the same evangelical themes, namely the need to infuse church practices with more of the New Testament spirit. The Oxford Group is described in the article below.

My father, Spike Marlin, was the first to hear Fr. Colquhoun. They went to his church in Sandymount, just outside of Dublin City center in Ireland during the year before and after they were married in 1932, and before Spike went to New York City to look for work. At that time a vocal minority of Anglo-Catholics within the  Church of Ireland was caught up in the idea of reuniting with the Roman Catholic church. Their models were three Oxford dons – Ronald Knox and Cardinal Newman, who did become Roman Catholics, and C.S. Lewis, who thought similarly but did not.

My Mom became an Anglo-Catholic by 1935 and then a Roman Catholic in 1938. If the text below is too hard to read, maybe someone who can read it will transcribe it. [Postscript: Thank you, Michael Fitzgerald, for doing this. I have posted it.] 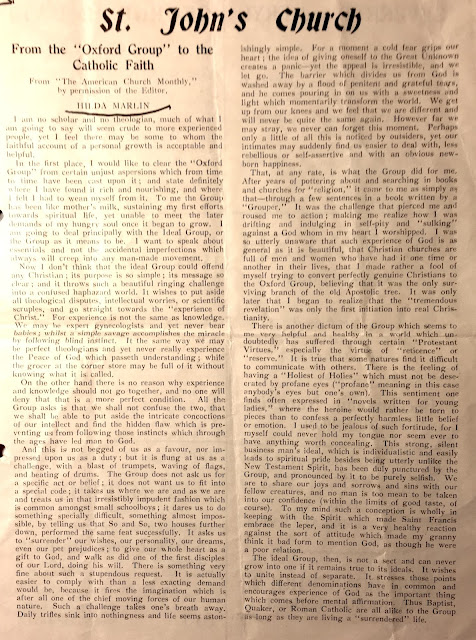 March 31, 2017 I have made two corrections:
(1) Fr Colquhoun never made it to the rank of Bishop. His regalia must have been that of Monsignor.
(2) The Anglo-Catholics within the Church of Ireland were a minority, even at the Sandymount Church. For the corrections, thank you James Robinson.

May 19, 2019 (Washington, DC) Much interest in this post judging from online "pageviews". I don't know who is visiting. If someone wants to reach me, my email address is teppermarlin@aol.com. 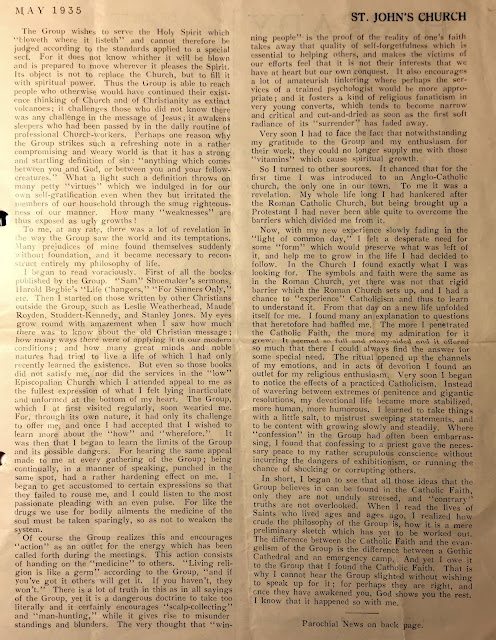 Posted by John Tepper Marlin at 10:53 PM 3 comments: Links to this post